Just Be Good, Whatever That Means

Have you seen this in the news? The American Humanist Association has launched an ad campaign encouraging nontheists to be good for the sake of being good. (See picture.) 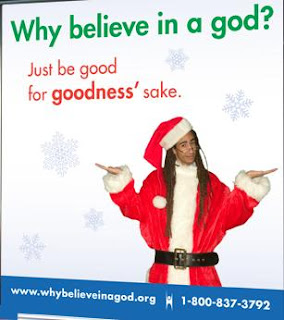 This goes back to the argument theists hate having with atheists on morality. The atheists consistently misunderstand our position, and it makes theists want to beat our heads against a wall. (Come to think of it, maybe that’s why they do this.)

They just can’t tell you why.

The theistic position is this: Without a transcendent moral standard, morality is nothing but pragmatism. It’s the categorical imperative without the imperative.

Why is murder wrong? If there is not an absolute moral standard, murder is not wrong; it’s just a counterproductive thing for society to permit.

Why is stealing wrong? Who says you have a right to your property? If there is no transcendent morality, no one; society can’t function if everyone steals – but what’s so bad if I do it?

You possess no right to life, much less liberty, privacy, or dignity unless there is something endowing you with those rights that is higher than the people with power over you.

For all their talk about atheists and humanists living lives just as moral as theists, when societies are run under these philosophies, they always produce horrific abuses.

Apart from God, morality becomes whatever works, and might makes right. If you have sufficient power you can get away with whatever you deem is “best” for your goals – even if it’s summary execution of millions of political dissidents or starving the masses while providing leaders with luxuries.

The problem with humanistic philosophy is that it actually produces the “progressive, dynamic values” the AHA claims it promotes. The values become very dynamic, conforming to the plans of the powerful with an ends justify the means mentality.

The answer will speak volumes.

I had just read Dr. Mohler's Blog before reading this and it made me think of what Prince Charles said upon being asked if he loved Princess Diana...answer: "Yes, whatever that means."

If society has no absolutes we are in a perpetual state of confusion...never grounded
...ambiguously taking our meaning from our last encounter. The sadness of this, can be illustrated by a conversation I had with my dad shortly before he died...He was suffering from dementia and was in a long term care home. On this particular visit he told me...

I can't even type this without tears...

Get articles via RSS

or via email using FeedBlitz

Living by the Book

The Holiness of God

Love Your God with All Your Mind